After nearly a decade working as a paranormal investigator (a.k.a. ghost hunter) I decided to take things to the next level. The result was a collaboration with "Ghost Lady" Cathi Weber which became the plural "Haunted Housewives."

Cathi was a well respected historian and storyteller who ran a local tour business called the Willoughby Ghost Walk. I basically stalked her until she agreed to work with me as my paranormal and ghost hunting partner. I also made her give me a job. I am one of her ghost walkers. It's tough work, but somebody has to do it, right? 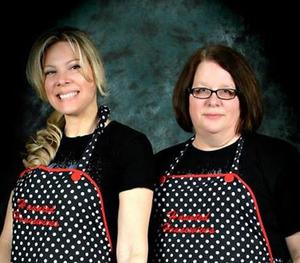 There are housewives, and there are HAUNTED housewives. I am the latter, the original "Haunted Housewife," a moniker I've had since 2007, although I've been living the life for well over 20 years. I got involved in the paranormal at a very early age, but it wasn't until I became an adult that I had the opportunity to openly express my strange fascinations, AND make a career out of it to boot!

In September 2014, I released my first national book America's Most Haunted: The Secrets of Famous Paranormal Places  (Penguin Press/Berkley Publishing, 2014.) It is a collection of the top most historically relevant haunted locations in the United States. Detailed history, first hand accounts, and the Haunted Housewives most profound paranormal adventures are chronicled in this myth-busting, thoroughly researched book. It's full of thrills, chills, and a few unexpected surprises!

Available on amazon.com, Barnes and Noble, and other fine retailers.